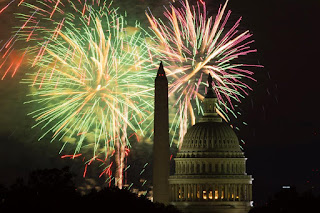 Annually Americans partake of a national holiday known as the Fourth of July. They fire up grills, ice down beverages, visit any place that has water so they can swim (and dodge sharks in some of them), buy consumer products for a reduced price at locations across the country that revel in the idea of a three day weekend, and detonate miniaturized explosives or watch them in displays that fill the evening skies with bursts of color. When asked why they are engaging in this pastime, some will remember the name of the holiday and say, "It is the Fourth of July. You know, Independence Day!"

Only a handful will get it correct and say, "It is the Fourth of July. This is the day the Second Continental Congress ratified the final version of the Declaration of Independence." (I really hope that some of them are my students!) You see, the delegates in that Congress had voted on July 2, 1776 on the matter of independence. That is the correct date and it is borne out in the journals of that Congress as well. Yet, for two centuries, Americans have celebrated Independence Day on the Fourth.

This means that every year Americans butcher American history as a national exercise. Okay, they butcher it practically every day, but this one day really stands out. Why do they celebrate the wrong day? After a passionate speech by John Adams on July 1st, a speech which might well be one of the most important of his life, the delegates voted to adjourn until the next day regarding the matter of independence. Some of them were hoping instructions from their home colony legislatures would arrive and in fact some did.

The next day, July 2nd is when the vote for independence was taken. It was a foregone conclusion that the motion would carry, but it was hoped the vote would be unanimous. The motion read, "Resolved, That these United Colonies are, and, of right, ought to be, Free and Independent States; that they are absolved from all allegiance to the British crown, and that all political connexion between them, and the state of Great Britain, is, and ought to be, totally dissolved." The final tally was 12 colonies for, none against, and one (New York) abstention as they had not received instructions from their legislature on the matter yet. The former British colonies were now states and part of the United States. At that point the delegates turned their attention to another matter, a declaration of independence which had been written by a committee.
Another request to adjourn was made so that members could take the time to read this proposed declaration and was agreed to. After taking care of some matters when they met on the morning of July 3rd, the Congress assembled as a body of the whole and began to make alterations to the proposed declaration. After a full day of changes, they adjourned until the following day which would be the Fourth of July. On that day, Congress ratified the document which is now known to us as the Declaration of Independence. 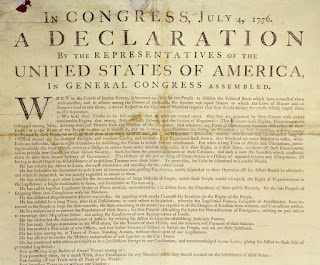 Congress then ordered the document to be printed by John Dunlap. These copies are known as the Dunlap Broadside and about 200 were made. Only 26 are known to exist as of today. On the very top of these copies are the words, "IN CONGRESS, July 4th, 1776" and as a result that is the day that Americans would remember as Independence Day many years later when they began to celebrate the occasion.
Yet, they're wrong. The records show that Independence Day should really be on July 2nd. John Adams thought that should be the date as well and he was correct. Unfortunately, his choice was rejected due to the words on the top of the printed document by people who didn't bother to check and confirm the facts. However, as seems to be usual with John Adams, some of what he suggested came to pass:
"The second day of July, 1776, will be the most memorable epoch in the history of America. I am apt to believe that it will be celebrated by succeeding generations as the great anniversary festival. It ought to be commemorated as the day of deliverance, by solemn acts of devotion to God Almighty. It ought to be solemnized with pomp and parade, with shows, games, sports, guns, bells, bonfires, and illuminations, from one end of this continent to the other, from this time forward forever more."
We may not celebrate it on the 2nd of July like we should, but we do celebrate the event with fireworks and baseball albeit not quite the way he envisioned since baseball wasn't around yet!
More tomorrow on the actual Declaration of Independence and the rejection of the utterly incorrect myths in "The Price They Paid."
For sources on today's topic, see the following websites:
National Constitution Center:  http://blog.constitutioncenter.org/2015/07/when-is-the-real-independence-day-july-2-or-july-4/
Journals of the Continental Congress:  http://memory.loc.gov/cgi-bin/query/r?ammem/hlaw:@field%28DOCID+@lit%28jc00525%29%29:#N0101-114 (July 4)