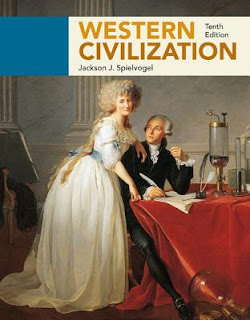 I have to admit I am a bit excited right now. I am putting together the course for Western Civilization II which I will be guiding students through for the Fall 2018 semester at Moberly Area Community College. This is the first time I've taught this course, so I have some work to do on it.

In looking at what to include in the course, the most obvious thing that stands out is What is Western Civilization? How does one define Western Civilization? I've seen several approaches to teaching the course (content wise, not instructional philosophy) and most end up teaching European History II. I can understand why this is the modus operandi in Western Civilization I because so much of the focus derives from Greek and Roman eras and their influence, but for WC II this becomes problematic.

First of all, Western Civilization is exported on a global scale in the time period covered in WC II. The collusion of peoples which is explored in WC I as being between Europe and the Near East expands and becomes Europe versus the Far East. Religious conflict which had been between Christians and Muslims is transformed to conflict between Christians while at the same time also being between Christians and all other forms of religion. The expansion of economic power generated struggle on a global scale as the balance of power for Western Civilization shifted from the Mediterranean Basin to the North Atlantic coast.

Rather than focus exclusively on Europe, I think the focus has to include the Atlantic World concept as well. We will have to focus on Europe for the most part. There is no question that Europe dominated the world stage from 1500 to 1950. Its expansion across the globe is undeniable as well as its impact on every continent and culture it contacted. Yet, at the same time, we have to understand that what we term Western Civilization changed dramatically as the result of the contact with other peoples on a global scale.

Western Civilization II is really a story about a changing civilization as the result of multiple events. As the peoples of Europe adapted to the changes taking place, they in turn caused more change. Unlike earlier periods of time which remained fairly static for lengthy periods of time, change began occurring faster and faster in the last 500 years. As with any change, institutions, traditions, and people reacted to those changes. Those that failed to adapt were either changed themselves or replaced. None remained the same.

As we today see rapid change, we ourselves face a novel concept which threatens to change the way we perceive the world around us now. I find it interesting because the perceptions we hold for our worldview today are derived from the development of the nation-state in the 17th century. Those perceptions are going to change over time as we see the emergence of larger regional blocs of nations working in concert along economic, political, military, and social lines (and thus replacing existing economic, political, military, and social lines) or devolving into a patchwork quilt of micro-states built along religious, cultural, and racial lines locked into competition for resources (and thus quite likely replicating the same problems that caused so much warfare over hundreds of years).

Which way do we go from here? To solve any problem, one should always look to its cause before beginning to develop solutions. The key to so many of the world's problems lie in a thorough and grounded study of its past. Unfortunately, far too many people reject factual history in favor of a history which only serves to support a national mythology.  Even sadder is the realization that politicians will often support the national mythology over factual history to further their own political power.

Our hope lies in the education of peoples. Why do I say this? Western Civilization II is also the development of the intellectual capacity of people. From the Renaissance, Reformation, Scientific Revolution, Age of Enlightenment, to our Information Age today, people have sought to turn back the darkness. Inquiry and understanding are the modalities of historical thought and the world has benefited from those. In the teaching of history through courses like Western Civilization II, we educate people to use those modalities in viewing the world around them. Small wonder reactionary people belittle and deride intellectualism because they realize their very existence is threatened by people who employ critical thinking skills through their use of inquiry and understanding.

Yes, I am really looking forward to teaching this course this fall!

Posted by Xathos at 2:50 PM No comments:

Many today associate the 1950s with the birth of rock ‘n’ roll, hula hoops and coonskin caps, and perfect television families. However, the decade proved. - ppt download

Many today associate the 1950s with the birth of rock ‘n’ roll, hula hoops and coonskin caps, and perfect television families. However, the decade proved. - ppt download
Posted by Xathos at 1:25 PM No comments: