Neither question can be answered without studying the past. Without understanding our past we are groping blindly into the future. History cannot predict the future, but it sure can help us in planning for it. In watching this excellent video put together by Joanna Hayes, you can see history unfold with concepts about history brought forth. She began by saying, "History is a window into the past....and understanding the past is the key to understanding the present." I think this is a very important statement and one which I use in my course along with the video.

I use a series of picture frames to build an analogy of why we study history. I will share the lesson with you. First, the blank frame. A window into the darkness. Only by examining it will we learn what the darkness represents. We really have no idea what this represents, but as we work with sources, both primary and secondary, we begin to add detail to the picture. 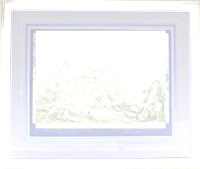 In the second picture we see details start to emerge. The picture is still very unclear and more research is needed to understand what exactly it is. Why do we study the painting? Some of it is simple curiosity. What is this painting? Who was the artist? Why did they paint it? What does it tell us about the past, assuming it is a painting from the past? It could be a contemporary painting for all we know. If so, what is it telling us about today? 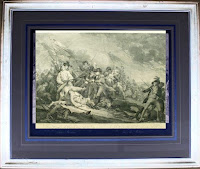 At this point students begin to recognize the painting, but they usually cannot tell me what exactly it is. The lack of color plays a strong role in their inability to identify who the people are in the painting. Also, their lack of knowledge about the past plays a very strong role in their inability to recognize the painting. The only information I have given them is that it is a famous painting. Hopefully, they will figure out that it is a historical painting of American History since we are in an American History course.

With the next picture, we see more detail because it is the actual painting. Hey, it's a survey course! We are always pressed for time. At this point they know it is from the American Revolution, but most still do not know what battle. Here I begin to ask for specific details such as where is the smoke and flames coming from? Who is the wounded man about to be bayoneted? Is the man in the red coat on the right stopping the soldier from killing him? Why is there a black man in the lower right corner? Where is the American flag at? Who are these people? Why are they fighting? What is this painting representing? When did this take place?

I then ask the class to consider the words I began the questions with. They are important in the how we study history part. I will explain that next week. For now, I give them the details behind the painting. I also ask them if the painting is accurate.

1. The painting is The Death of General Warren at the Battle of Bunker’s Hill, June 17, 1775 by John Trumbull.
2. It was painted in 1786, 11 years after the battle
3. Trumbull was present and saw the battle through field glasses
4. The battle actually took place on Breed’s Hill
5. The painting has several details which are representative of the battle itself, but are not quite accurate
6. The smoke and flames are from the village of Charlestown which caught fire and burned to the ground when the British ships tried to bombard the rebels. They could not elevate the guns high enough and the shot fell into the town on the shore.
7. The wounded man is Joseph Warren who died in the battle. He did not die that way though.
8. The man stopping the soldier from bayoneting Warren is Major John Small.
9. The black man is thought to be Peter Salem. Whether he was actually there or not, a few black men were there fighting the British.
10. There was no American flag because there was no United States as of yet. The battle took place a year before the Second Continental Congress voted on independence.

There are other details in the painting, but that is enough to get them to understand that things are not always as they appear. The study of history involves asking questions and seeking answers to them. Without doing any research people might think that the event known as Bunker Hill actually took place like Trumbull painted it. In studying history we get the details straight. 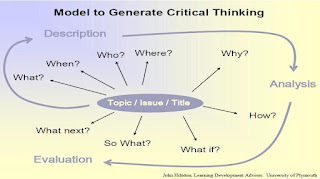 The study of history is also one of the best disciplines for developing critical thinking or analytical thinking skills. When the course is taught correctly, students use the process of historical analysis in learning about history. That involves activist learning, not instructivist. Instructivist is the boring lecture many of us were tortured with at one point or another by instructors who didn't know how to engage their students.

We study history to identify patterns and trends in the past. Some historians claim history repeats itself or to be more apt, history is cyclical. George Santayana is famous for a saying that goes, "Those who do not study history are condemned to repeat it." Far too often people will utter those words while completely ignoring them. 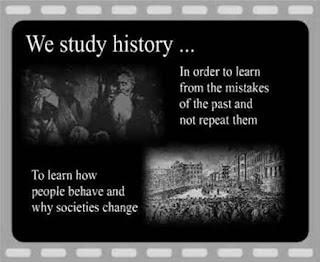 That leads us to another wonderful reason to study history. By studying history we learn about other cultures, other people, other civilization and how they have interacted with us and others in the past. In doing so we learn why many things are the way they are now. This is part of the interface between history and geography.

When you put these two together you can explore past events and hopefully recall the famous quote mentioned above. Unfortunately, many people refuse to learn from the past such as the disaster that was the Invasion of Iraq in 2003 and would do it again. These people cannot look back to the Vietnam War and see the same patterns emerging because they do not have analytical thinking skills. To me, avoiding useless wars, unwinnable conflicts, and alienating other peoples is just a really stupid idea, but all you have to do is open the newspaper and read the headlines to find that there are plenty of people that lack the ability to use critical thinking skills. 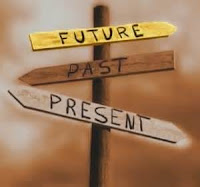 The study of history is also about solving problems. Identifying trends, researching patterns, researching facts leads us to discovering why a problem exists and how to deal with it. That is done through critical thinking skills which is a major part of a college education. Unfortunately, not all college graduates have that skill. We know this because American business has stated so. They need problem solvers. College students who study history learn those critical thinking skills. The college graduate who can demonstrate that they are capable of using critical thinking will find themselves employed. All the above reasons are good reasons as to why the study of history is important.

So here we are at the intersection of the past, the present, and the future. Where do we go from here?