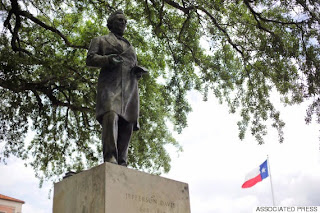 Last week students at the University of Texas campus vandalized the statue of Jefferson Davis that has stood on the campus since 1932. Statements were painted onto the base of the statue saying, “X and y. This is not the first time the statue has been vandalized. A permanent marring of the statue occurred in 1987. Another attack on Labor Day of 1989 resulted in another painted message which was later removed. There have been ongoing attempts to have the statue removed since the 1980s. Recently, the University of Texas student government recently pass a resolution to have the statue removed from its location on the South Mall of the campus because it is offensive to many students. The passing of the resolution was done through what is described as an “overwhelming” majority of the student body.

This leads us to question the purpose of monuments. Why are some monuments erected and later seen as offensive by many? The statue of Jefferson Davis is not the only monument to come under attack recently. As the image of a fictional romantic southern history of moonlight and magnolias fades away in American memory, a factual based history has been taking its place. This history is far from pretty and presents the past in all its ugliness which has resulted in some groups and individuals to challenge it. History and its presentation to the people has been a major part of the culture wars since the 1980s. As American Exceptionalism has been revealed as an artificial façade concealing historical reality, so too has the Lost Cause mythology. 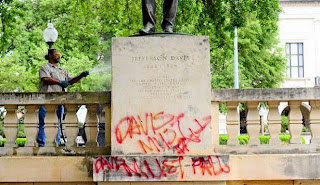 Many of the adherents to the Lost Cause are older Americans who claim descent from Confederate veterans. Borrowing a slogan from the Ku Klux Klan of the 1950s, their motto is, “Heritage, not Hate.” However, the actions of many who espouse that slogan show that Hate is still part of the Heritage. Interestingly, these Heritage supporters reject the facts of history in favor of their beliefs which is part of the problem with how monuments are interpreted by the public today. In addition, monuments to the Confederacy have been placed in areas where the Confederacy never had a presence such as Montana and California. Also, some heritage supporters enjoy waving Confederate Battle Flags and erecting flagpoles along highways with absolutely no explanation as to what the purpose of the flags are.

Many of the monuments to the Confederacy were erected after 1890 when white southerners solidified their control over the political affairs of the south. Both blacks and poor whites were barred from participating in the political process through poll taxes and literacy tests much like the concept of Voter ID is being used today in those same states to deny voting rights to the same classes of people. This was a period known as the Nadir of Race Relations in America. With complete control over state and local governments, groups like the UDC, UCV, SCV, and others erected thousands of monuments to honor men who not only had committed treason against the United States, but to men who had waged a terror campaign against blacks in the South, murdering and lynching thousands of blacks and ethnic minorities over a period of several decades.

It is plainly obvious that the people of this nation or at least the majority of the people of this nation have turned their backs on the racism of the past. They are ready to move forward in a world where race is nothing more than a physical skin color. They want to remove many of the monuments that are historically inaccurate, offensive to many, and demeaning to others. Yet, these heritage groups oppose this. In fact, they plan to erect more monuments honoring men who fought against the United States of America. In the process of doing so, they plan to present a fictional past to the public to justify the placing of these monuments. Many of the current and proposed monuments lack any contextual explanation at all which leads me to wonder exactly why the monuments are proposed in the first place.

It would be wrong for any one person to make the decision about any monument. This needs to be a group process. The removal or erecting of any monument usually involves a group decision. While the public cannot usually do anything about monuments on private grounds, it does have the right to decide on what is placed on public grounds as well as anything created with public funds. This is a democracy despite the best efforts of those who wish to turn it into a theocracy. If the public wishes to remove or bar monuments it may do so. To counter the will of the people, some southern states have had laws passed that bar the public from removing monuments as in, “A bill…relating to the description of the state flag, defacing public monuments, and obstruction of Stone Mountain, so as to provide for additional protections for government statues, monuments, plaques, banners, and other commemorative symbols; to provide for related matters; to repeal conflicting laws; and for other purposes.” Interestingly, in passing these laws those politicians violated the concept of local control which many campaigned on which just shows how much lip service they pay to things like principles.

So my question to you is what should we do about monuments that are historically incorrect or offensive to many? Should we remove them? Should they be destroyed? What historical significance do they have? Should signs explaining their context be placed next to them? Who makes the decision on what is historically accurate?
Posted by Xathos at 6:30 AM