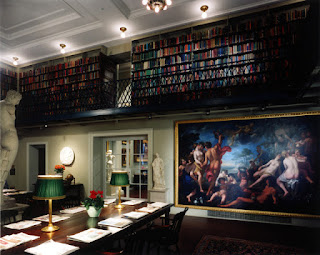 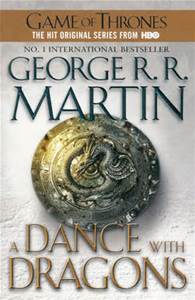 The fifth volume in the massive series, A Song of Ice and Fire, checks in at 1126 pages and five years late in its publication. George R.R. Martin has reached incredible heights in the slow paced writing style matched by few authors. Granted, the books are good, but the long period between releases is approaching unrealistic proportions. Also, the length of these books could clearly be cut down so that two or even three books could be released in that time span. That may or may not be up to him, but to the publishing company. For that matter the first five volumes could easily be ten to twelve separate works.

In any event, you have to admit Martin can spin a tale. I have to admit I’m hooked. There is something about the epic struggle between the factions of the realm in Westeros, the Stark family’s survivors, and the struggle for the hand of a queen in Esteros that compels me to keep reading. The pages are filled with violence, but character development is unparalleled in Martin’s books. These are not simple one dimensional characters created to fill roles, but people who change their minds and even their beliefs over time. Some are locked into their beliefs such as those who oppose Jon Snow and murder him while others are willing to open themselves to new ideas. In any event, the people are what drive the action of these books and I like many of you will read all the way to the last page of the series to find out what happens to them. 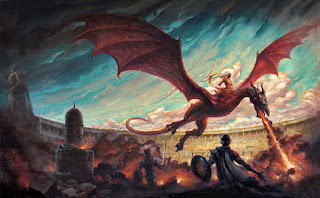 As of this writing, the HBO series, Game of Thrones, which is derived from the books has reached the point where the next season goes beyond what Martin has written. I don’t think this will spoil the books because there are many differences between the two already. I hoped it would spur Martin to write faster, but if anything it may have slowed him down. This book had plenty of action in it, but I notice that HBO cut out a lot of it as well as what took place in Feast For Crows and plunged forward. That makes me wonder just how much of these books is extraneous to the overall storyline. Yet, I would not want to miss out on discovering the fate of any character, even the minor ones. 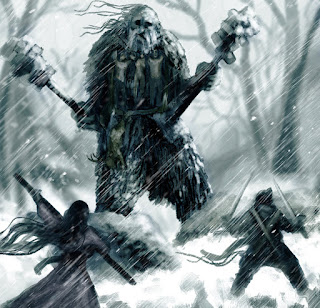 For me, this was the weakest of the five books. I am not particularly enamored of Danerys and feel that her tale could have been condensed as too that of Jon Snow and the Wall. As much attention as has been paid to these two characters and their struggles, it makes one wonder just how important they are to the overall story. This volume was practically devoted to them. It is pretty clear that Martin knows how to flesh out his world. He has been called the American Tolkien and it seems he is doing what Tolkien did, that of revealing every detail of the world and leaving no stone unturned.

All in all, the book is a good read, but I just dislike the long release periods between them. I think that has the potential to lose fans and since it is very likely the HBO show will end before the seventh and alleged last volume of the book series, Martin may find himself loosing readers who lose interest between books now that they find the answers they want on screen. Again, that is entirely Martin’s choice. Other than that, I still recommend the series. It is well written and character driven. It is definitely not for children and should not be considered Young Adult by any stretch of the imagination. It is realistic high fantasy with the gutters and dregs of society brought into the light. Some say it is too real, but let’s face it, the medieval era was no era of chivalry. 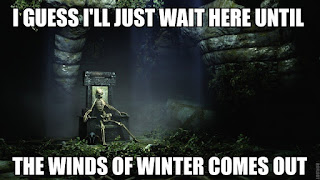 So if you are interested in a series that packs raw fantasy with realism and just enough magic to remain believable while at the same time making everything mysterious, this is the series for you. One thing seems clear from Martin’s writing so far. The real struggle for the world is going to take place in the North along the wall. Winter is no longer coming. It is here and I think the next volume in the series is going to shock everything in the Seven Kingdoms when long ignored tales of fiction turn out to be very vividly and deadly fact. So if you haven’t read the series as of yet, now is the time to get started. You only have 5200 or so pages to read before you make it to the end as of now!
Posted by Xathos at 12:13 PM